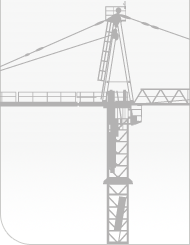 Krøll Cranes A/S was established in 1956 by F. B. Krøll. Krøll Cranes started as an agency and licensed manufacturer of Linden cranes. Gradually the company started to develop its own product range with cranes which were more competitive than the licensed products. Through the 60's and 70's the company's product assortment grew and the company started to establish a whole network of agents around the world. In the mid 70's Krøll mainly exported to USA, Canada, West Germany and Scandinavia.

As these markets declined in the late 70's the company started to develop larger crane types and look to new markets. In the mid-80's this resulted in the biggest crane deal of the century: 13 units of K10000, the world largest tower crane, to former USSR for the construction of nuclear power plants and with the prospect of many future deals. The company grew, was renamed to Krøll Giant Cranes A/S and employed up to 300 people. The company was successful and decided to put all its eggs in one basket.

The Chernobyl- accident in 1986 instantly changed everything. Although the client accepted all ordered K10000's the prospect of more giant crane deals was bleak. The basket fell to the floor - hard.

Due to the vast amount of resources and time spent on building these huge cranes the company was left to compete in the general construction market with an out-dated product range. Furthermore, the network of agents had crumbled to pieces and the company went through a long list of managers, each trying to bring Krøll back to the position it had in the mid 70's. It was an uphill battle but the company managed to develop a completely new assortment of cranes tailored to the market and established a new and strong network of agents.

A few key order placements and a close relationship with Korean shipyards ensured that Krøll survived and slowly found its niche. The experience in designing and manufacturing far bigger cranes than anyone else in the market has proved invaluable and is the foundation that our business is built upon today.

In 1997, Krøll became a member of the Muhibbah Engineering Group along with Favelle Favco Cranes. This has helped Krøll establish itself as a market leader once again. There are over 10 agents globally and the company produces cranes ranging as low as 160tm and as high as 25000tm.

Company is established by Mr. Fridtjof Berg Krøll. It is an agency of Linden Cranes from Sweden.

Krøll moves to its current premises in Lynge north of Copenhagen. The factory is purpose-built and brand new.

2 units of K-1600 (1600 tonne metre capacity) are manufactured and delivered to Sweden. These were the biggest cranes at the time.

The first K-3000 (3000 tonne metre capacity) is manufactured and delivered to the USA.

Due to very strong competition on self-erectors, Krøll Cranes A/S stops the manufacture of self-erecting cranes. All in all approximately 4,500 units of self erectors were manufactured.

All Krøll cranes are equipped with PLC control.

The first K-5000 (5000 tonne metre capacity) is manufactured and delivered to a shipyard in South Korea.

The first K-4000 (4000 tonne metre capacity) is manufactured and delivered to a shipyard in South Korea.

Krøll Cranes: For over half a century we have been designing and manufacturing quality tower cranes ranging from 70 to 25,000tm. No matter what size you need you are ensured the highest manufacturing and technology standards, a make-to-order solution and responsive, knowledgeable service.

Count on the highest manufacturing standards and knowledgeable service from the world leader in heavy duty tower cranes to help you get the job done in a profitable way.

Krøll's range of tower cranes offer versatile and reliable solutions for the most demanding lifting operations. Their ability to cover a large area on a small footprint make them ideal machines to meet the toughest lifting requirements on even the most challenging jobsite, to help ensure that you finish your job on time, every time.


Cookies are necessary for this site to function, but also gives us information about how the site is used, so we can make improvements, both for you and others. Cookies on this site are mainly used for measuring traffic and optimizing the site’s content.
By continuing to browse through this site, you are accepting the use of cookies.
If you would like to know more about cookies, or how you delete them, click here.